﻿﻿﻿
﻿﻿One of Creative New Zealand's funding priorities is to support craft exhibitions to tour nationally and internationally and last week I had the good fortune to be in Auckland whilst new work by Jim Denison and Leanne Williams was on show at Objectspace. The Crystal Chain Gang: Fancy Fools Flight was originally produced and curated by Greg Donson, Senior Curator at the Sarjeant Gallery in Wanganui, one of New Zealand's favourite glass destinations (see our previous blog). It will also tour to The Suter Art Gallery Te Aratoi o Whakatu in Nelson, Pataka Museum of Arts and Cultures in Porirua, and Aratoi Wairarapa Museum of Art and History in Masterton. 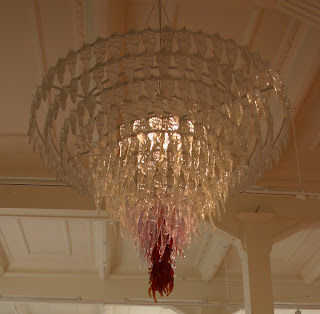 In lots of ways, this is great news for New Zealand craft.  To see craft objects exhibited centre stage in public galleries bodes well for the future and also for the makers of such work. It is also encouraging to see galleries outside the main city centres being included, thus ensuring that audiences for craft are developed in a broader geographical sense.

As I stood in the gallery entrance, I found myself rather excited by the glass mirage that greeted me, including an impressive chandelier with crystals adorned with glass wings and a central column  of cast-glass chicken feet. Supported by a funding grant from Creative New Zealand, this new body of work not only blurs the boundaries of craft, art and design, it challenges those boundaries too.

Since 2004, Jim Dennison and Leanne Williams have worked collaboratively as the The Crystal Chain Gang, supported by a dedicated crew of between two and three studio assistants who have been vital in bringing this labour-intensive and heavy cast glass work to fruition. Taking the overlooked utilitarian bottle form as its starting point, the exhibition features a group of bottles based on the form of cut-glass decanters often used to house alcoholic spirits - but could be seen to hold spirits of a different kind. The Crystal Chain Gang top these with stoppers that feature a line up of guardian characters that are drawn from a rich visual memory bank, both real and imagined.

Sourcing inspiration from second-hand shop finds and images from books, the pair literally re-mould these overlooked objects into new forms, punk them up, subvert them and make them foolish and heroic all at once. They state, “The message is not in the bottle but it is the bottle itself... our intention is to stir memory and re-contextualise the bottle to try and engage the viewer in new and unexpected ways”. 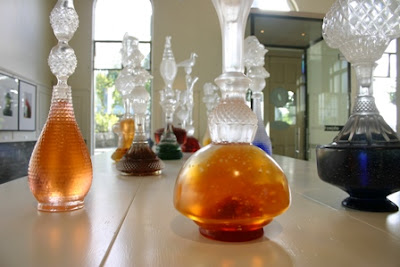 Dennison and Williams draw inspiration from a wide range of areas, including the history of glass-making abroad, from which they cite René Lalique and the elaborate glass furnishings created for Eastern palaces during the nineteenth century as influences. Closer to home, New Zealand colonial history and objects and imagery sourced from second-hand shops are all brought together. 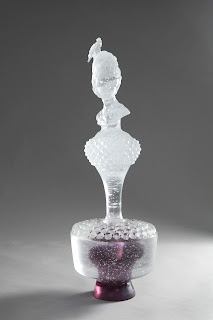 The exhibition also features earlier works made by the Crystal Chain Gang including a delightful colourful flock of budgies, tuis and bellbirds and a jewelled skull named Polly. One immediately appreciates the skill evident in bringing about such level of detail, for example the bird feathers. Their life-like form is engaging.

Also engaging is the accompanying 30 page exhibition publication made possible with support from Creative New Zealand. With stunning colour photos, an introduction by the original curator Greg Donson, and essays by Greg Donson and Bronwyn Lloyd it is a great read. Copies can be purchased direct from Objectspace for $15.

The exhibition continues at Objectspace until Saturday 9 June.
Posted by Jenna-Lea Philpott at 18:28