It's been a busy time for Craft Aotearoa in recent weeks, representing the needs of craft practitioners throughout the submissions and hearings process as part of the draft Christchurch Central City Plan. Our five page submission outlined the capacity of the craft sector pre and post earthquakes and we identified a range of short and long term projects that could help not only those in the craft sector, but the city as a whole to recover. Here is a snapshot of our submission:
Christchurch is key to the wider creative economy and arts infrastructure throughout New Zealand. It is home to thousands of artists, creative businesses, industry groups, arts organisations, and numerous craft practitioners working in various mediums including wood, jewellery, glass, ceramics, textiles, metal, musical instrument making, flax, and more. Christchurch is also home to craft guilds (such as the Guild of Weaver and Spinners, the Embroiderer’s Guild and others), The National craft gallery, and the online craft network Felt, whose members often attend monthly Crafty Business Network meetings in the city.
Prior to these earthquakes, many craft practitioners either worked from home based studios, and/or studios established in parts of the city where the rent was at the lower end of the spectrum. Their work was shown locally and nationally through galleries, designer retail spaces, at craft fairs and events, at The Arts Centre, and online to an audience looking for something special in an age of mass produced and often imported items.
Although the New Zealand and Christchurch craft sector is not well researched in terms of demographic data, consumer research shows that across New Zealand household spending on craft increased by as much as 12% between 1991 and 2001 and that the third most popular cultural activity was purchasing handmade craft (Measure of Culture: Cultural Experiences and Cultural Spending in NZ. Statistics NZ and Ministry of Culture & Heritage. June 2003). The Arts Centre in Christchurch with its craft studios and markets and the numerous craft studio businesses interspersed throughout the city centre helped to make Christchurch a memorable destination.
Supporting the Christchurch craft sector is therefore not only about supporting those that design and make objects, but also those who buy craft and visit craft studios for whom such activity contributes to their own cultural wellbeing.
Christchurch craft practitioners first started to raise concerns about their capacity to continue to create new work (and as importantly, to sell their work) within weeks of the February 22 earthquake. At a meeting on 27 April, facilitated by founding trustee Jenna-Lea Philpott, it was noted that there had been significant loss of individual and shared studio spaces in the central city and suburbs (including Lyttelton) and that both commercial and residential properties were affected. Concerns were also raised about: 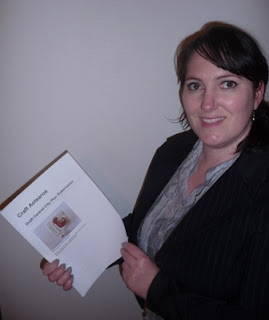 Founding Trustee Jenna-Lea Philpott holding
Craft Aotearoa's submission
Craft Aotearoa shared these concerns and immediately started researching the availability of space. Following up a lead provided by CPIT's Martin Trusttum, we visited one of the last two storey wooden historic houses left standing in the city on Barbadoes Street. Building owners Robyn and Mike were excited at the thought of their house becoming home to various craft studios, a craft gallery,  and craft organisations. As we showed the house to others in the craft sector, everyone saw the potential, however, after several more weeks of research and discussion, it became apparent that the cost of resource consent and other compliance measures was too onerous for the owners liking and sadly, the project never progressed further. So we are on the hunt for space again.
Our presentation to Councillors as part of the hearings process needed to be no more than eight minutes and as the draft plan already conveyed an understanding of the urgent short term needs of the craft sector, we decided to focus on the long term vision for craft - something that had been overlooked in the plan. As with other art forms, the need for space to create new work is essential and so too is the need to show this work in a purpose built facility. Unlike other art forms, craft has never relied heavily on public investment but now needs support in order to re-establish its economic model once again and return to self-sufficiency.

Craft Aotearoa advised Councillors to give serious consideration to the opportunity apparent - to establish a leading New Zealand craft gallery in the city, perhaps adding value to the cultural precinct, showcasing the best of New Zealand craft (whilst also providing opportunities for emerging craft), and attracting tourists as well as the wider public into the central city again. Such a facility could help cement our place in the Pacific and showcase our Maori and Pacific crafts in the South Island. A dedicated craft gallery space surrounded by studios, would promote opportunities for craft education and learning, public engagement, and ensure that local, national and international exhibition opportunities did not bypass Christchurch. Furthermore, it would help to cement Christchurch's distinctive qualities going forward - as has been shown by the model of Ruthin Craft Centre in North Wales - a town of 5,000 people whose craft centre attracts visitors from across the UK.
Councillors congratulated us on the quality of our submission and asked several questions. The media, and Ngai Tahu also expressed interest in our proposal. Now we wait to see the final plan, and in the meantime, we continue to converse with those who see merit in giving our city, our people, our visitors and our craft practitioners something different to look forward to - something that will inspire current and future generations to come.
Before signing off, we'd like to thank Elfie Spiewack for supporting Craft Aoatearoa's submission with the following image of her work post-earthquake. 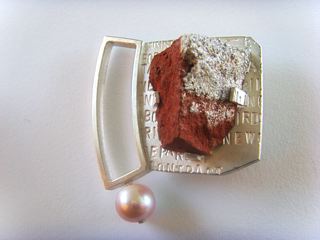 Posted by Jenna-Lea Philpott at 01:39