Craft Aotearoa is back in action after taking an extended sabbatical following the earthquakes of 23rd December, and we have been busy working on a range of initiatives including upcoming blogs featuring craft news and interviews. Later in this blog, we catch up with Adrienne Anderson, Producer with Whitebait TV,  but first, an introduction to their ground-breaking upcoming craft television series. 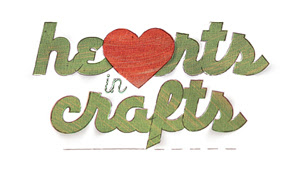 As daylight savings loom and the weather cools, you will be excited to learn that spending a night in front of the telly is about to become a whole lot more interesting. A new show that celebrates New Zealander's passion for craft is being launched on the 7th April at 6:30pm. Commissioned by TVNZ 7, Hearts in Crafts is a 13 part series and the first of its kind that celebrates New Zealand's rich and diverse crafting culture, including traditional and contemporary crafts.

Presented by Tamsin Cooper (well known designer of delicate handmade fashion accessories and coats) and Justin Newcombe (guru of landscape designs big and small), the show features DIY projects that anyone can make at home, and also profiles people who are internationally renowned craft masters, exuberant hobbyists, environmental saviours turning trash to treasure as well as the meeting places where like minded crafters gather to share and learn.

Over the past decade, the popularity of hand crafting in New Zealand has been on the comeback with a noticeable rise in the number of craft markets, blog sites and Facebook pages. Producer Adrienne Anderson has been “hugely inspired by the depth of talent and diversity of craft we have uncovered in the making of the series. New Zealanders have always been into making things and what we are seeing now is a return to our roots, reigniting the skills we learnt as children and putting them to creative use. In our grandparents day these skills were borne out of necessity but in today's context, the motivation of craft takes many forms.”
Adrienne adds that “the craft revival is being driven by more than purely the desire to be creative. The economic downturn has had an impact with many people turning to making, rather than buying, and for those with the creative talents to take it that step further, it provides a wonderful opportunity to turn it into a business. There is also a rapidly growing movement that is driven by environmental concerns - the need to eliminate waste - upcycle, re purpose and re use. For others, it's about the sense of belonging that comes from getting together to knit or sew and have a chat.”
Craft Aotearoa caught up with Adrienne and asked some questions about the ground-breaking television series itself:

Why did Whitebait TV want to make a TV series about craft?
The idea had been floating around for a couple of years. It was really about acknowledging the resurgence of hand crafting in recent years and that there was no vehicle for showcasing our wealth of crafting talent on screen.

Tell us about the name Hearts in Crafts…
It speaks for itself really – it’s a show for people whose heart and passion is in crafting.

What was the best thing about making this series?
The extraordinary talent, creativity and diversity of the many crafters we were privileged to work with in making the show.

What did you learn?
That when it comes to crafting, your only limitation is your imagination! And that there is no end to the creative uses for old blankets!

Will there be another series?
With TVNZ 7 going at the end of June, the show is only guaranteed for one season, however we are hopeful that is popularity will be such that other options will be considered for a second series.

How would you describe the NZ craft scene?
Alive and thriving!

Until our next blog, check out the work of glass artists at the New Zealand Society of Glass Artists.

Posted by Jenna-Lea Philpott at 01:04